Blessed are the poor in Manchester NH!

Blessed are the poor: ‘Funky Christmas Wishes’ granted for those in need 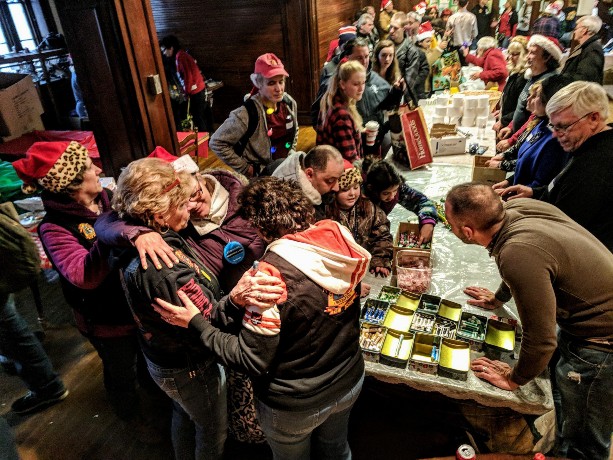 MANCHESTER, NH – Four years ago Henry Demers thought it would be a good idea to organize a Thanksgiving outreach for the city’s homeless. But God had a better idea, says Demers, and redirected him toward something much bigger, resulting in one of the city’s largest annual charitable day’s of giving.

This year’s event – renamed Funky Christmas Wishes in honor of longtime advocate for the homeless Joe Funk, who passed away in July – was the fourth such event. It provided essentials, food and gifts to 300 people in need, just for showing up Dec. 9 at 1st Baptist Church on Union Street. Attendees also got a free lunch, a $5 gift card of their choosing to Dunkins or Subway, and the offer of intercessory prayer.

All items – from brand new sweatshirts, blankets, socks and underwear, to hand-knit winter accessories, toys for kids and festive holiday hats for everyone – were donated by more than 70 local church communities and organizations.

Once inside the church, each person was given a ticket and was partnered with a volunteer “personal shopper” who stayed with them as they made their way around the tables inside the sanctuary, where they could choose one of each item they wanted or needed and stuff it into a bag. But first, attendees were invited upstairs for a church service until their number was called, for a time of prayer and singing.

Demers, founder and president of Harmony Home and lead organizer for the event, has a heart for the city’s homeless. His non-profit ministry is a place where the homeless can stop by during the day to have a meal, take a shower, wash their laundry, or pick up some clean used clothing and seek help from Demers and his staff with whatever they’re struggling with – including addiction.

Brad, left, a first-timer at the annual event, received many items through Funky Christmas Wishes, including a $5 gift card and a warm winter coat for his daughter, Aldiana, 4. Photo/Carol Robidoux

“I used to work at the city’s Mental Health Center,” says Demers, who acknowledges that the services provided through Harmony Home are similar to those the city’s Homeless Service Center on Central Street used to offer. It was closed for good in 2015 due to lack of funding.

“That’s why I quit my job and started Harmony Home. At the time they closed the day center, I knew winter was coming and I knew how important those services were to the homeless,” he says. “It’s been possible through my faith in God – I had faith that it would come together. It was something that was stirring in me anyway, but when they closed the day center, I knew what I had to do.”

Demers says almost every day in the 18-months he’s been in operation, someone comes to Harmony Home seeking a way to end their addiction. He’s been able to help anyone with a valid ID and a Social Security number to get treatment, usually through a California-based recovery center.

It’s no mistake that Harmony Home, a residence located on the grounds of Hope Tabernacle Church on Cedar Street, is just around the corner from the old day center. 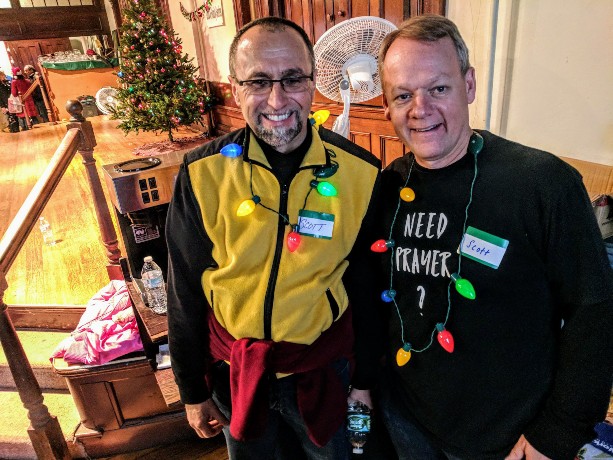 Scott Levesque, left, and Scott Spiewak, right, made themselves available at the exit for anyone in need of prayer.

“I’m in one of the most dangerous places in the city – we’re surrounded by drug dealers and prostitutes, there have been homicides and other crime,” Demers says. “I love being where the needs are. Harmony Home is gated, and people tell me once they come through the gates, they feel safe.”

Demers’ own story is inspiring. He was orphaned as a teenager, losing both his parents to cancer within a year of one another by the time he was 18. He was the youngest of five kids, so he still had family support and his parents left them financially secure, but he gives God all the credit for guiding his path.

“I was a partying teenager, but after losing both my parents so young, it sobered me up and changed me spiritually. I wanted to be able to look back one day at a life I could be proud of, and that’s been my mission ever since,” Demers says.

The name Harmony Home is based on a biblical verse, Romans 12:16, “Live in harmony with one another. Do not be proud, but be willing to associate with people of low position. Do not be conceited.”

Willie Johnson, pastor of the New Beginnings Church of God in Christ on Elm Street, has been involved with faith-based Christmas outreaches around the city for 16 years. He says it’s simply what he’s called to do as a Christian. 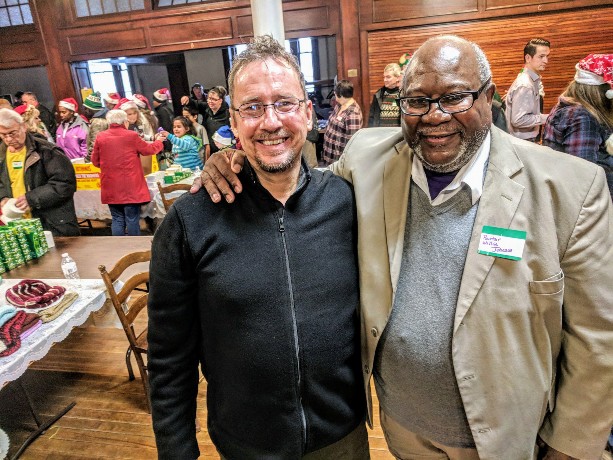 “We’re doing what the Lord says to do,” says Johnson. “To see all these people getting served, it makes me feel good. Jesus said there’s always going to be poor and needy among us. The only way we can help is by doing what he calls us to do – if someone’s hungry, feed them; it

they’re thirsty, give them something to drink; if they’re in the hospital, visit them.”

While it doesn’t necessarily absolve a city from having resources in place, Johnson says outreach to the needy should be on everyone’s agenda.

“You have to want this. You have to want to be nice and good. That’s for each of us personally to decide. Christ died on the cross for our sins so that we can be a blessing to one another,” Johnson says. 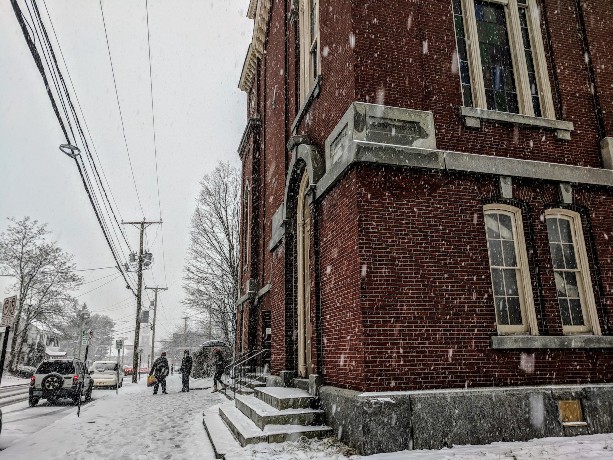 1st Baptist Church on Union Street was a blessing to the city’s poor and a shelter from Saturday’s storm. Photo/Carol Robidoux

Near the exit Scott Levesque, of Imperishable Love Ministries, and Scott Spiewak who belongs to House of Prayer in Concord, gently asked people if they could pray with them before they left.

“It’s important to meet the needs of people where they are, but the most important thing is that they get to meet Jesus,” says Levesque. “There have been tons of healings and tons of miracles here.”

Many people accepted the offer of prayer, citing family members with cancer, or personal ailments. Volunteers from several area ministries, including a group of women from New Covenant Riders, part of the Christian Motorcyclists Association, quietly bowed their heads

and laid hands on people.

“I think this is a beautiful thing. I’d love to see it happen routinely in the city, not just at Christmastime,” Spiewak says.

“Not only is this a blessing for the community, but for the body of Christ to come together and work in unity, that’s a beautiful thing to see. People are laying down their lives for the Lord,” Levesque says. 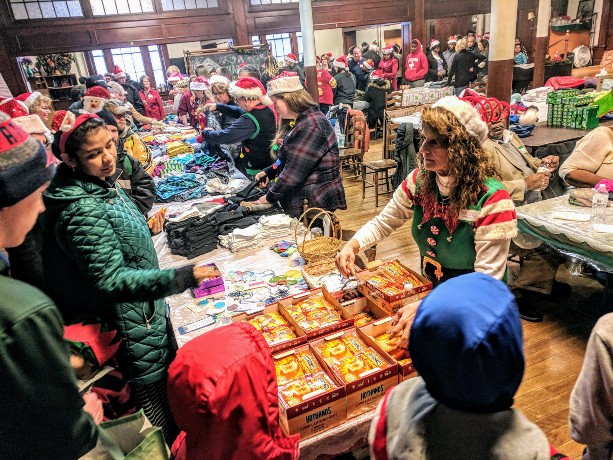 Phil Haney of Merrimack volunteered his time as a personal shopper, and accompanied four people through the line.

“This is my second year. My wife knows Henry, and I got involved through her. It was a very humbling experience. For me, it’s a sort of resetting, just to feel blessed to help others in some small but positive way for Christ, and to reinforce how really blessed we are,” Haney says. “It reminds me not to take anything for granted.”

Henry Demers holds the whiteboard listing all the churches and organizations who pitched in to make Funky Christmas Wishes a reality. Photo/Carol Robidoux

He relayed an experience that confirmed to him that he was in the right place at the right time. “I had gone out earlier this week and the Lord’s been putting on my heart that the cold weather

is coming and that there are so many people who don’t have what they need. I had picked up a coat and it was in my car. About 10 minutes after I got here, I got to talking with an older gentleman, I’d say in his ’70s, who looked like he’d had a rough life. He said he wished he had a warm coat. They didn’t have any adult-size coats here, but I remembered the coat in my car. I gave it to him,” Haney says. “I feel like it was orchestrated.”