How it all started with Smith Wiggleworth

For those of you who want to lay hands on the sick and see more healing, this early testimony from Wigglesworth will bring you hope for a greater future! Just obey and believe!!

……“Here is Wigglesworth coming again and bringing a lot more. If he only knew, he could get these people healed at Bradford just as easily as to get them healed in Leeds.”

These leaders knew that I had a compassion for the sick and needy, and one day they said to me: “We want to go to the Keswick convention and we have been thinking whom we should leave to do the work. We can only think of you.” I said, “I couldn’t conduct a healing service.” They said, “ We have no one else. We trust you to take care of the work while we are away.” A flash came into my mind: “Well, any number of people can talk. All I have to do is to take charge.” The following week when I got there the place was full of people. Of course, the first thing I did was to look for someone who would do the speaking; but all whom I asked said, “No, you have been chosen and you must do it.” And so I had to begin. I do not remember what I said but I do know that when I had finished speaking fifteen people came out for healing. One of these was a man from Scotland who hobbled on a pair of crutches. I prayed for him and he was instantly healed. There was no one so surprised as I was. He was jumping all over the place without his crutches. This encouraged the others to believe God for their healing and all the people were healed. I am sure it was not my faith, but it was God in His compassion coming to help me in that hour of need. 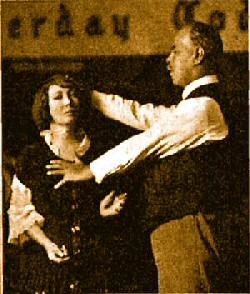 After this the Lord opened the door of faith for me more and more. I announced that I would have a Divine Healing meeting in Bradford on a certain evening. I can remember that there were twelve people who came that night and all of those twelve were miraculously healed. One had a tongue badly bitten in the centre through a fall. This one was perfectly healed. Another was a woman with an ulcer on her ankle joint and a large sore that was constantly discharging. She was healed and there was only a scar the next day. The others were healed the same way.

One day a man asked me, “Does Divine Healing embrace seasickness? “I answered, “Yes. It is a spirit of fear that causes your seasickness, and I command that spirit to go out of you in Jesus’ name.” He was never seasick again though he had to travel much.

One day a man came to the house. He was a very devoted brother. I said to him, “Mr. Clark, you seem downcast today. What’s up?” He answered, “I left my wife dying. Two doctors have been with her right through the night and they say she cannot live long.” I said to him, “Why don’t you believe God for your wife?” He answered, “Brother Wigglesworth, I cannot believe for her.”

He went out of the house broken-hearted. I went to see a fellow named Howe who was opening a small mission in Bradford. I thought he was the right man to go with me, to assist me. When I said, “Will you go with me?” he answered, “No, indeed I won’t. Please do not ask me again. But I believe if you will go, God will heal.” I realise now that the Lord put those words in his mouth to encourage me.

Well, I knew a man named Nichols who, if he got the opportunity to pray, would pray all around the world three times and then come back. So I went to him and said, “Will you come with me to pray for Sister Clark?” He answered, “Yes, I will be very glad.” We had a mile and a half to walk to that house. I told him when he began to pray not to stop until he was finished. When we got to the house we saw that Mrs. Clark was nearly gone. I said to the one I had brought with me, “You see the dangerous condition of Sister Clark. Now don’t waste time but begin to pray.” Seeing he had an opportunity, he began. I had never suffered so much as I did when he was praying, and I cried to the Lord, “Stop him! Please, Lord, stop this man’s praying.” Why? Because he prayed for the dear husband who was going to be bereaved and for the children who were going to be motherless. He piled it on so thick that I had to cry out, “Stop him, Lord; I cannot stand this.” And thank God, he stopped.

Though I knew that neither Clark nor Nichols believed in Divine Healing, I had concealed a small bottle in my hip pocket that would hold about half a pint of oil. I put a long cork in it so that I could open the bottle easily. I took the bottle out of my pocket and held it behind me, and said: “Now you pray, Mr. Clark.” Brother Clark, being encouraged by Brother Nichols’ prayer, prayed also that he might be sustained in his great bereavement. I could not stand it at all, and I cried, “Lord, stop him.” I was so earnest and so broken that they could hear me outside the house. Thank God, he stopped.

As soon as he stopped, I pulled the cork out of the bottle, and went over to the dying woman who was laid out on the bed. I was a novice at this time and did not know any better, so I poured all the contents of that bottle of oil over Mrs. Clark’s body in the name of Jesus!

I was standing beside her at the top of the bed and looking towards the foot, when suddenly the Lord Jesus appeared. I had my eyes open gazing at Him. There He was at the foot of the bed. He gave me one of those gentle smiles. I see Him just now as I tell this story to you. I have never lost that vision, the vision of that beautiful soft smile. After a few moments He vanished but something happened that day that changed my whole life. Mrs. Clark was raised up and filled with life, and lived to bring up a number of children; she outlived her husband many years.

Everybody has to have testings. If you believe in Divine Healing you will surely be tested on the faith line. God cannot bring anyone into blessing and into full co-operation with Him except through testings and trials.