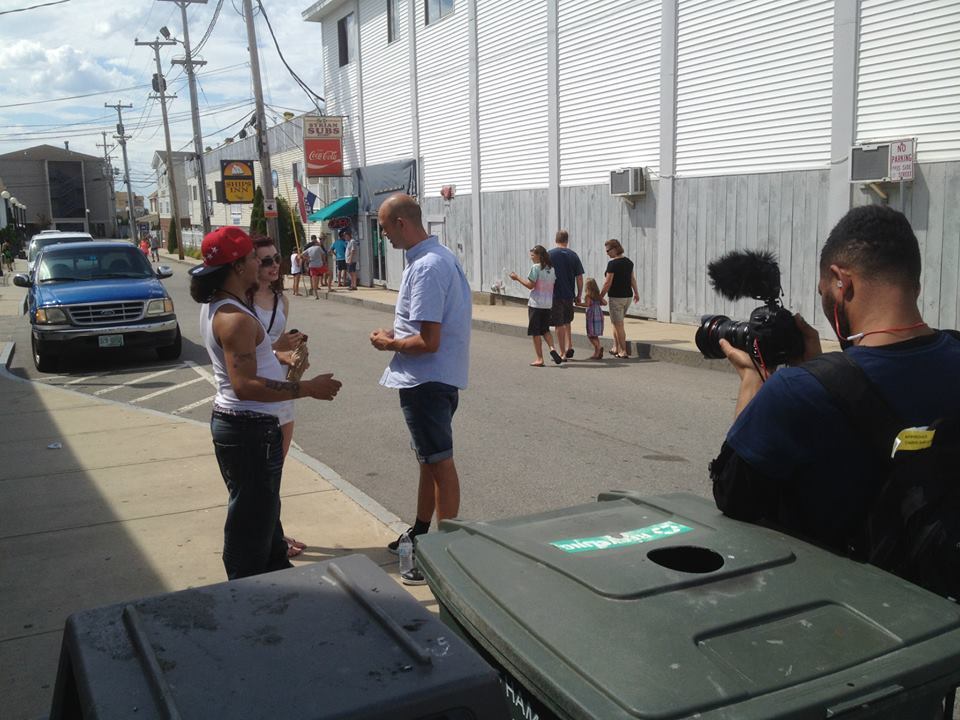 A few weeks ago, I sensed God say I should reach out to my amazing friend Torben Sondergaard and ask him if I could sponsor a visit for him to do a healing/Kickstart training conference in NH/New England this summer.

My heart has been so hungry to see revival in the North East and I love Torben’s simple way of training in healing and disciple making just as Jesus called us to do like in the Book of Acts. I knew it would be amazing if he could/would come. Paul and Suzanne Bowman who have longed for revival for the past 20 years, were so gracious in opening His Way Church for the invitation and I am so very thankful to them for this offer and for their pure hearts for Jesus.

So as timing is everything with the leading of the spirit, it was God in control and Torben said yes to the invite! I was so excited and immediately I started to sense God would use this visit to profoundly change many lives, but never in my wildest dreams could I imagine just how much God would accomplish through his teaching and disciple making training, and never could I have imagined the supernatural events that have since unfolded over these past days!!!! OH MY Gosh! Never could I imagine this would all become part of a feature documentary film about how God is changing the church in the world! That was only decided on the Flight to Boston on Tuesday again as the Spirit of God led Torben and camera man Lebo, God has been faithful to provide the most amazing experiences captured on film!!!

Over 4 days, approximately 200 people from about 30 churches experienced what I believe will go down in history as a legendary event that will change countless lives and effect the eternal destinies of thousands (perhaps tens of thousands) of people through the event and through the film – much will be from here in New England.

From the first 10 minutes arriving at the Thursday night meeting where we saw a wheelchair bound man with MS get prayed for and walk within 30 minutes (climbing a double set of stairs himself to the meeting!), to healing after healing after healing by “kick starters” who never prayed before yet experienced literally dozens of people healed completely ……backs, ankles, knees, feet, and shoulders, legs growing out, demons cast out, full baptisms of the Holy Spirit resulting in speaking in tongues, ….yes we saw it all unfold. You can’t make this stuff up- it is real, it’s in the Book of Acts, and it’s normal Kingdom living that we are now experiencing it in person right here in greater Boston – Amen!

In traveling everywhere these past days with this wonderful man of God and his family, I have personally experienced non stop Kingdom living exactly like Jesus called us to do and I have to admit, it has been more amazing then anything my eyes have ever seen, ears have ever heard, or my spirit has revealed ever before in my ENTIRE life.

Now I know for certain that NOTHING can ever compare to a “life laid down and lived for the sake of the Gospel” such as this life Jesus has written on our hearts, to walk out each day by faith. God is so amazing.

Honestly it’s been a bit like drinking from a fire hose watching all this emerge as I witnessed some of the best filming and documentation of the supernatural unfold before my eyes, which will become part of the feature movie mentioned above to be called “The Last Reformation-The Beginning”.

I can’t even come close to properly describing the intensity of my last four days experiencing this amazing move of God …. It’s so exciting that it’s beyond words and I’m about to step out and see more over the next week!!!!!

As a result of all this my good friend Mike and I (who was my invaluable partner in assisting with this event) along with a few other friends, have had such a burning to move ahead with the Book of ACTS ministry so we have decided to start using the Pioneer School as a foundation for “Kick Start” and discipleship training with the blessing of Torben. Things are moving forward and I think it’s going to be a new reformation, but maybe also “www.TheLast Reformation.com”!!

God is amazing, Jesus is Lord!!!
Thank you all who attended for making this event such a life changing move of God that will change so many lives across the world!!

Woman walks again without a walker!!

Wow, check out this miracle healing of a woman who was paralyzed on her left side from a stroke but now is healed. This is the gospel of Jesus…this is “the book of Acts church” in action! Halleluiah God is so good!

Don’t miss this miracle by Jesus!! Amazing Miracle Testimonies from the Pioneer School with Torben Sondergaard

Comments on the new video:

“I’m in tears. I’ve wasted so much time in pseudo Christianity. The real thing is so refreshing. ”

“Wow, that small boy’s crying eyes just crowned it. What a powerful Lord we have.”

“This is so powerful! Glory to God! Hallelujah!”

“Hope for Europe yet!”

“This is amazing. I want to live this life.”

(GREAT NEWS, Torben has agreed to come to teach in MA, USA in late July! Wooohooo! – shoot me an email details at testimonials@documentedhealings.com or visit his site here to support the trip through www.TheLastReformation.com (Please write: Gift for the U.S. trip))

Watch the amazement and their faces as these two women are healed by Jesus right at the mall! Torben Sondergaard is teaching them how to build faith and “lay hands” on the sick.

The healing doesn’t come from us, but from the love of God and the work Jesus did on the cross, through the power of the Holy Spirit in us….all three working as one, within His sons and daughters… Christians!

Last comment he made is worth hear and remembering….”we don’t live by feeling, we live by the word of God” ….. I say AMEN, let’s walk by faith not by sight!

Watch these three amazing miracles from Russia! Simple yet amazing miracles just like in the book of ACTS for those who believe! I love Torben’s heart to reach the unsaved by demonstrating the power of the Gospel through miracles!

….these were his words about this meeting: “An atheist started believing when she experienced healing and much more happening. Jesus says that the harvest is great and that it is ready for harvest. The problem is not the harvest, but that the laborers are few.
If we again begin to go out and heal the sick and then preach the gospel to them, we can quickly see people saved.”
For more radical teaching on the power of the first century church visit www.thelastreformation.com – God Bless You
Click Here for Articles & More Healing!

Amazing Healing testimony from Arizona teaching with Torben ( Thelastreformation.com ) Torben teaches the simplicity of faith by living out the book of ACTS. He has many free and solid disciple teachings on his site if you are looking for grow in your walk with a pure heart! Love Torben’s heart!!! He’s awesome

This is a written testimony of beautiful birth miracle recently sent to Toben Sondergaard!
God is Good!
—–
A few days ago I got this amazing testimony.

Hello, Torben
I hope you and your family are doing fine. I don’t know why, but I suddenly got a strong feeling to share this with you… back in the beginning of 2007, you vistited us at home. Then you suddenly asked if you could pray for me because I had some stomach ache. At the time you didn’t know what was wrong as far as I know…The truth is that we had tried to get child no.3 for over a year, which just kept waiting…At the end I got so strong stomach ache that I was hospitalized on the department of Gynaecological in Herning Hospital. After some thorough medical examinations it showed that I had a cyst on the right side of my ovary which had grown so big, that it bursted. My left ovary was twisted around itself and there was nothing to do… I couldn’t get any more children – The physician told me… two days after you vistited.

When you prayed for me I didn’t think so much of it. I had already given up hope of geting any more children. I just wanted God to take the pain. But at a rutine check at the Hospital 5 weeks later, I had a tiny baby. Its funny, just 5 weeks old. The doctors couldn’t understand it and more scannings only showed the same. Two ovaries that didn’t work, but a healthy little foster…I don’t remember what you exactly prayed for that day, but you said something like God heard my prayer, and knew my burning wish…When I was 5 month in pragnancy, I feared losing my little girl, which we just camed to know was a girl… we talked about the babys name at Bibel Camp. My hospand tolded that Sara, Abrahams wife, sounded in his head. I went to intercession that day and the person came to me, prayed and said, you dont lose what God has given you…and tell me, Sarah, Abrahams wife…does that mean anything to you?

I was shocked. She said the child whould bring many to God and be a great joy, too. Exactly a child like my little Sara, I have never seen before, who is so happy and rewarding… she prays many times a day, sing for God and tells about him to others. She knows thing that she isn’t surpose to know. Things I havn’t told her…things that is written in the Bible. I just wanted to share this with you, and thank you for the intercession back then.