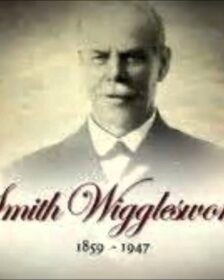 Smith Wigglesworth on the Power of the Holy Ghost

So I have within my hands, within my heart, within my mind, this blessed reservoir of promises that is able to do so many marvelous things. Some of you most likely have been suffering because you have a limited revelation of Jesus, of the fullness of life there is in Him.

In Oakland, Calif., we had a meeting in a large theatre. God wrought in filling the place till we had to have overflow meetings. There was a rising tide of people getting saved in the meeting by rising voluntarily up and down in the place, and getting saved. And then we had a riding tide of people who needed help in their bodies, rising in faith and being healed. One of these latter was an old man 95 years of age. He had been suffering for three years, till he got to the place where for three weeks he had been taking liquids. He was in a terrible state. I got him to stand while I prayed for him; and he came back, and with radiant face, told us that new life had come into his body. He said, “I am 95 years old. When I came into the meeting, I was full of pain from cancer of the stomach. I have been so healed that I have been eating perfectly, and have no pain.” Many of the people were healed in a similar way.

(After the telling of the above incident in the meeting in Wellington, New Zealand, where this address was given, a lady arose who had rheumatism in the left leg. After being prayed for, she ran the full length of the hall several times, then testified to partial healing. A young man with pain in the head was healed instantly. Another man with pain in the shoulder was healed instantly also.)

In the second chapter of Acts, you will see that when the Holy Ghost came there was such a manifestation of the power of God that it wrought conviction as the Word was spoken in the Holy Ghost. In the third chapter we read of the lame man healed at the Beautiful Gate through the power of the Spirit, as Peter and John went into the Temple. And in the fourth chapter, we read of such a wonderful manifestation of miraculous power through the Spirit that five thousand men besides women and children became believers in the Lord Jesus Christ. God gives manifestation of His Divine power, beloved, to prove that He is with us. Will you not, right now, open your heart to this wonderful God, and let Him come into your life and make of you all that His infinite love has moved Him to provide in Christ Jesus, and that His infinite power, through the Holy Ghost, has made possible to be wrought in sinful man.

Excerpt from the book: “Faith That Prevails”

“I slipped and fell on Broadway, San Diego, in February, 1921, and as was afterwards discovered, fractured the coccyx (the base of the spine), and so severely wrenched the hips and pelvic bones that I became a great sufferer. As the broken bone was not discovered and set until about two months after the accident, the constant pain and irritation caused a general inflammation of the nervous system, and the long delay in getting the bone set, made it impossible to heal, so that, my condition steadily grew worse, and I was taken to the hospital and the bone was removed about a month after it had been set. Though the wound healed rapidly, the nervous inflammation remained, and so for many months longer I was in constant pain and unable to get around without assistance. I was taken to the first service held by Mr. Wigglesworth on the 2nd of October, 1922. At the close of the service all those who were sick and in pain and had come for healing were requested to rise if possible. My husband assisted me to my feet, and as those were prayed for by the speaker I was instantly healed. How I do not know. I only know the Great Physician touched my body and I was made whole, and freed from pain.

“After I got home I showed how I could sit down and rise with my hands above my head; when before it had taken both hands to push up my feeble body, and I had to have straps on my bed to pull up by. No more use for them now! I lay down and turned over for the first time without pain. I shall never cease to praise God for the healing of my body through the precious blood of Jesus and in His name. I walked to the street car alone the next day and attended the next service and have been “on the go” ever since. Can give names of friends who can substantiate all I have written. To Jesus be all the, praise and glory.” – Mrs. Sanders, 4051 Bay View Court, San Diego, Calif.
Click Here for Articles & More Healing!